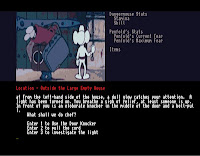 Building on the AMOS programming skills gained from coding up his footie title, he's decided that the subject matter for his next release will be none other than 80s cartoon legend, Dangermouse.

Things seem to be progressing well, and Chris recently commented on Facebook that;

The initial preview screenshot showing Dangermouse and his assistant, Penfold, in front of a castle door looks rather impressive, and with curiosity getting the better of me I asked him how he went about getting the screen grabs down on to a humble Amiga.

"[I'm] using jing screencapture - then using Corel to decrease [the] pallete to 16 colours and save as [an] IFF file. Sometimes AMOS doesn't recognise the image and I have to repeat [the process] 4 to 6 times before it is accepted."

Late last night Chris uploaded a minute long clip to YouTube, showing the game in its current state. You'll see that word wrap needs to be implemented and some spelling and punctuation mistakes need correcting, but what's there already is very impressive and shows that this could be a fun adventure to play through.

Take a look for yourself...


Naturally, I'll be reporting back on the progress of the game over the coming months. In the meantime, you may wish to 'like' the AmigaPD Facebook group where Chris posts regular development updates covering this game and his football management sim.
Posted by Rob Hazelby at 09:35