It's the start of a brand new week, and details of a new Amiga game have just surfaced.

Here's English Amiga Board member amiman99 with the details;


"Introducing [a] new game from Amiman99, made with Backbone, called "Jump Block Jump!"

The game plays similarly to other "run and jump" games popular on mobile platforms. It requires precise jumps and some memorisation.

The game was primarily tested on A1200 030 50MHz and the feel of the game is perfect, so if you are for a challenge try it on faster machine.
I'm providing 2 versions, one ISO for CD32 and second for other Amigas"

The game can be downloaded via the following links:

If you'd like to join in the discussion for this game then pop over to this thread on the English Amiga Board. 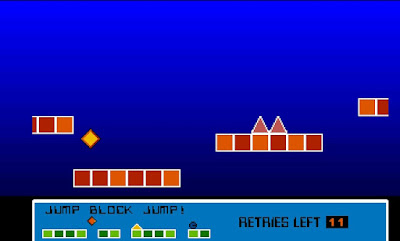