Spectrum to Amiga Conversion - The Pyramid 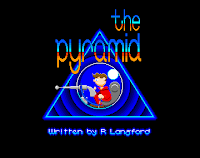 Released for the ZX Spectrum way back in 1983, Fantasty Software's "The Pyramid" was amongst the earliest batch of titles for the system to move away from simply being a conversion of one of the current arcade games doing the rounds.

Coded by Bob Hamilton, with assistance from Darren and Ian Hamilton, the game saw you control Ziggy, as he descended through the 15 layers of The Pyramid. A pure machine code title, the game featured smooth, well animated sprites, and arcade style gameplay.


OK, so what does this have to do with the Amiga? Well, during a recent browse through YouTube, I discovered that back in 1992 the game was ported to Commodore's 16-bit system. As The Pyramid was a much-loved favourite of mine on the Speccy, I wanted to give the Amiga version a go, and thankfully, as the author of the Amiga version had commented on the video I dropped him an email.

Whilst waiting for a reply to my email a quick search on Google directed me to the Langford Productions web site, where the author Richard Langford, had detailed a number of his projects, including his Amiga conversions. Naturally, amongst that list was his Amiga conversion of The Pyramid.

Along with a couple of screenshots and a link to a YouTube clip of the game in action, sitting proudly in The Pyramid section are scans of The One's review of the game, which they award an impressive 88%, while commenting;


"The Pyramid game from prolific author Richard Langford is up to his usual excellent standard of presentation, winsomely embellished with little touches, animations, sound and music effects.

The game is ace value for money as it offers change each play, allowing you to take a different pathway through the pyramid every time. I'm the sort of person that likes to see all the different screens and nasties - so I consider this feature a major plus.

Langford has really thought about speed and graphic rewards here, producing a must for anyone who plays games for the same reasons as me." 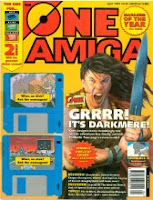 Unfortunately, Richard's web site doesn't have download links to his old games, and so I was unable to fire the game up. Thankfully, Richard responded to my message really quickly, and attached the ADFs of disks 1 and 2. He also responded to my comments regarding how much I loved the Spectrum original


"The game was originally public domain software and was just written as a bit of fun. Can’t remember when exactly I wrote that game, but I’m guessing around 1992. Unfortunately at the time I didn’t have a copy of the original game which is why my version is not really much like the original at all."

Armed with the disk images I quickly set about transferring them back to floppy disk, ready for play on a real Amiga.

The thing that struck me upon loading the game up was the sheer quality of the presentation. The menu screens are well drawn, colourful, and they made me smile. Why? Well, there's a jaunty little tune playing in the background, and while cycling through the various intro screens one of them displays a small trumpet with buttons/keys. Each of these represents one of the Amiga's sound channels, and on top of each of these is a little green bug who depresses the buttons as the tune progresses. It's all very slickly done.

On to the game itself, and the same high level of production continues. The sprites are colourful, well animated, and move around the screen smoothly. Despite what Richard told me in his email, I felt that the game played very similar to the Spectrum original, but at the same time featured numerous enhancements. Special pick-ups increase your score, and each level features a gorgeous animated backround, which makes clever use of colour cycling.

The most amazing thing about all this is that the game was coded in AMOS, and just goes to show what can be done with the language if put in the right hands. Also, although coming on two disks the game loads quickly, and you're not left waiting long to get into the action. Very important!

If you'd like to try the game yourself, you'll be pleased to learn that Richard has been kind enough to let me make the disk images available for download, and so I've uploaded them to my web site. A zip containing disks 1 and 2 can be found HERE (556K).

For those unable or unwilling to get the game up and running on a real or an emulated Amiga system, you can see the game in action below.


If time allows I intend to investigate some of Richard's other Amiga titles in the not too distant future. If they're up to this standard then I know I'll be in for a real treat. In the meantime I'm going to give this just one more go. Happy zapping!
Posted by Rob Hazelby at 09:00