The Story of "Stalker"

I was hoping to blog about this discovery when news first surfaced, but due to other commitments I've not had time until now. On the plus side it has meant that I'm now able to track the complete story from beginning to end.

The whole saga began on the 27th February, when English Amiga Board forumite DDNI, uploaded this photo (see below) to the forum, and commented;


"This lucky chap just got a new A1200 from Petro. Any ideas what game this is on the screen? I didn't see anything on HOL." 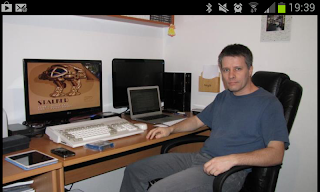 A number of possible leads and suggestions came in from fellow EAB forumites, with fellow forum member diablothe2nd, coming up with some interesting avenues of investigation. However, Later than day DDNI got back to the forum, and posted the following;

Stalker is a prototype of an Amiga game I developed with two of my friends about 20 years ago. The main unique feature of the game was the rearrangeable playfield. The player controls a two leg robot in a scene that is built by same sized blocks. These blocks are moveable in rearrange mode.

If you are interested, I have different versions of demos of the game in adf files.
The game has never been finished and has not been released.
We did not find a publisher to finance the development.
______________

Hopefully I will have some .adf files to try soon".

Members of the English Amiga Board didn't have long to wait, as the next day DDNI was back, and gave the following update;

"Got the .adf files which feature four versions from 0.18 to 0.64.
This game looks like it could have been great.

So far there isn't much in the game, but the mechanics are all there. The graphics and sound are crisp and atmospheric. It seems like the only things missing now are the game levels... I have been promised the full source code and support documentation too!

I will share these if and when I have got the green light.

DDNI was also kind enough to post up four screenshots of the game. You can see the full selection here, but here's one to whet your appetite. 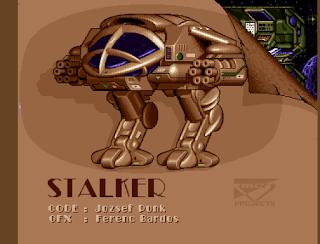 "So now I have the source code and a later version of the game. (sadly it has a Read/Write error. Can this be overcome?)

Jozsef has given permission for these to be shared publicly.

I will upload the adfs to the zone and provide the source code to anyone who wants it.

There have been no restrictions placed on the source code, but I assume referencing the original artist is an expectation".

EAB moderator Prowler, offered his services in an effort to repair the ADF, and in the meantime fellow forumite s2325 was kind enough to record and upload footage of the game in action to YouTube. The following day Prowler posted a quick update;

"I would say that there's a reasonable chance that the broken disk can be fixed.

Disk Block 1221 is at offset 98A00-98BFF in the ADF image. It's a data block, which doesn't appear to be massively corrupted, thankfully.

I will give it my best shot tomorrow in the emulator".

With Prowler busy working on repairing the disk, TheCyberDruid got to work on producing an entry for the game on the excellent Hall of Light web site. The completed entry can be found here.

Later that day Prowler returned with some fantastic news;

"Hey, I think I got the disk fixed!

The game now loads complete with background graphics, but the fix involved a certain amount of guesswork, so there may still be errors in the affected file (Stalker.data.1), so please post your bug reports here in that event (including what's needed to trigger the bug) and I'll have another look.

The fixed disk image will be up in The Zone shortly.

It's a real nice-looking game, so I guess I ought to attach some screenshots here now..."

You can find the screenshots at this EAB link, and more here.

If you'd like to download the ADFs of Stalker you'll need to be a registered member of The English Amiga Board. If you are, you can simply click here.

Meanwhile, the Amiga Music Preservation Society have ripped the music, so if you'd like to download that you can find it at this link.
The Amiga community should thank DDNI for his efforts which have lead to the discovery of this long lost title.

Who knows what the next undiscovered Amiga production will be.
Posted by Rob Hazelby at 15:24