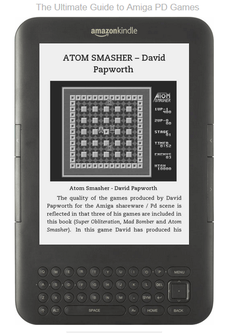 Work on the E-book, The Ultimate Guide to Amiga PD Games continues, and all being well it should see the light of day later in 2014.

Below is a quick update from editor Christian Clarke, who also runs the excellent AmigaPD.com web site;


"Just a quick update on our E-book, work is continuing at pace, and we are now quickly approaching the proof reading stage and adding in contents and index sections.

Fingers crossed, the book should be released this year, hopefully in a few months time.

Spent some time today (25th Jan) looking at formatting, as you can see from [the image to the left].

I have also started work on the front cover which I hope to share with you soon, just need to agree permission with the artist".

Naturally, updates detailing the progress of the E-book will be published on this blog as the release date gets ever closer.
Posted by Rob Hazelby at 09:00 No comments:

On a recent visit to the Remainder Software Facebook page (well worth a look!) I was reminded that I'd completely forgotten to post up the announcement from mid December revealing that a modified version of Downfall had now been released.

Well, for those of you who missed it, here's the release announcement from the Lee Hurley Productions web site;

This version attempts to fix some bugs that are present in the original version
Requirements
To download the game point your web browser here.
Posted by Rob Hazelby at 09:00 No comments:

The latest in Lemon Amiga's play guides has just been uploaded to YouTube, and it's EA's 1992 side-scrolling platformer Risky Woods.

Magazine review scores for Risky Woods were mixed, but the majority of publications scored it well into the eighties.


"Risky Woods is a cult classic with a large number of fans, to others it's a tricky and unfair game with enemies which must be shot before you even see them!

I put the game through its paces to see if C.U Amiga's 90% score was really worth it"

The review runs for just over 40 minutes and features commentary throughout. If you've never played the game before or if you have and you're after some tips, tricks and tactics, this is well worth some of your time.


"I could have completed the game and yet on the day I recorded this I failed. Some reviewers only show their very best runs but what you get with me is what happened on the day, with generally no retries or savestates to practice with. At least you can see my 1 Million score on the high score table."

Check out the video over on YouTube here.
Posted by Rob Hazelby at 09:00 No comments:

The latest in a long line of exclusive interviews to appear on the Amiga PD web site is with programmer Ian West.

Ian produced some of the most polished PD titles for the Amiga, including Ork Attack, Santa and Rudolph do Christmas and Doctor Strange.

In the interview Ian reveals which one of the games he created is his favourite, the loss of all his source code, where he got the inspiration from for his releases, and much more besides.

Check out the interview here.