Results of the 2014 Amiga Games Award

For the past few few years the Obligement web site have been running their annual Amiga Games Award, which aims to chart the most popular games released in the previous 12 months for either Amiga OS 68K, Amiga OS4.x, Morph OS or AROS platforms.

Each of the four charts are kept separate, meaning that there's no overall winner across all formats, and as this blog concentrates its coverage on the classic Amiga platform I'm only interested in the Amiga OS 68K chart.

In third place was the much-discussed (and pulled from download) "Smurf Rescue", by Mikael Persson. I must admit to not having tried this, as links to download this title were swiftly removed once Peyo's solicitors got involved.

In second place was "Renegades Deluxe 2014", a remastered version of Wayne Ashworth's original two player shooter, originally released way back in 1995. As with the initial release this is a two-player only title, so you'll need someone to play with.

Finally, in first place is the only commercially released game in the chart; "Tales of Gorluth: The Tearstone Saga". This Legend of Zelda-like RPG pushes the Backbone game creation software to its very limits. Featuring over 5 hours of gameplay, 64 colour graphics, and over 40 pieces of music, this is one of the most ambitious games released for the Amiga in many years.

The game can be purchased for £10.99 from the Amigakit web site.

We're now well and truly into 2015, and it'll be interesting to see what games will be released for the Amiga this year. With the recently released "Solomon's Key 2" now available for download we're off to a very strong start. Here's hoping the trend continues!
Posted by Rob Hazelby at 12:10 No comments: 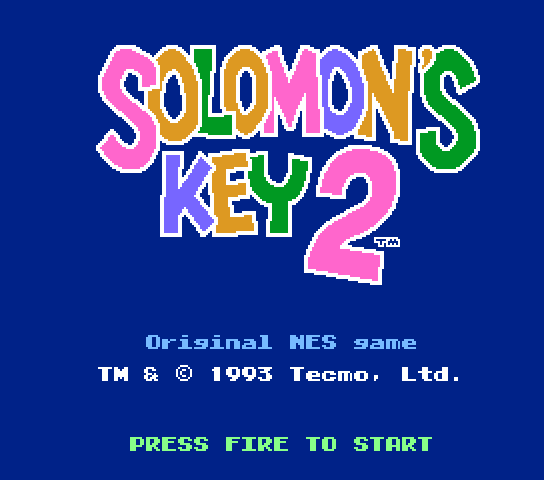 Back in April 2013 I reported that the Atari ST version of Techmo's platformer puzzler, "Solomon's Key" had been converted to the trusty Amiga. The team did a smashing job porting over the ST version, and it played brilliantly. (If you've not yet installed it then you really should do so at once!)

Fast forward almost two years, and I was pleased to see that a couple of weeks back the prequel, "Solomon's Key 2: Fire and Ice" had been released for the Amiga, having been converted from the humble Nintendo Entertainment System (NES) version.

Released by Techmo back in 1993, the object of the game is to extinguish all fires on each level in order to proceed to the next. To do this you need to either melt ice blocks or kick them into the raging infernos.

Here's hukka with the details;


"I have released my Amiga remake of the underrated NES puzzle platformer Solomon's Key 2 aka Fire'N Ice. Written in 100% assembly and should run on any setup.

Features include [a] built-in level editor and saving/loading [of] your progress. Some features from the original are missing: levels containing lava or enemies; some cutscenes and sound effects; final boss battle. Still, the game can be completed normally and bonus worlds are included.

The game can be played using either the keyboard, normal joystick or 2-button joystick/gamepad (tested using Megadrive pad). This version will run from Workbench.

Check out the game in action below, and then get yourself over to hukka's Solomon's Key 2 page to download the brand spanking new Amiga version.