It's been a fair old while since Chris Clarke updated the Amiga PD web site blog, as most of his free time has been spent working on both "Dylan The Spaceman" and his recently released shoot-em-up "Kingdoms of Steam".

Chris tells us that work has resumed on Dylan, and that he hopes to release a playable demo in the not too distant future.

Having played a work in progress version of this game I can tell you that you're in for a real treat. The game is already shaping up to be something very special, and easily up to the standard of the Codemasters budget titles of old. 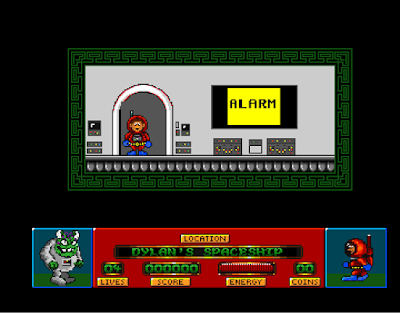 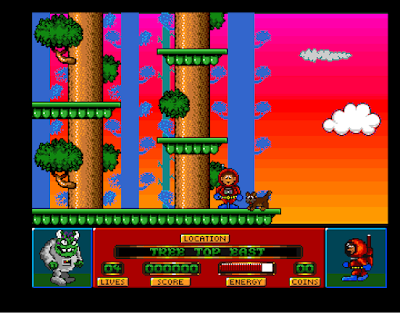 It was way back in January of this year that the Amiga Gamer blog featured unreleased Ocean / EA sports title Mutant League Hockey.

Back then the long forgotten title had been unearthed by the original programmer Adrian Brown, and he was attempting to get the game up and running into a fully playable state, ready for release.

Well,  some 7 months on the game is now available to play, and it's courtesy of Galahad of legendary cracking group Scoopex.

Check out the Indie Retro News page which has further details about the game including those all important download links.

Could this be the Amiga release of 2015? It's certainly looking that way!
Posted by Rob Hazelby at 21:22 No comments:

If you like your side-scrolling platformers to be challenging then Sqrxz 3 will certainly test your skills to the very limits. It's unforgiving in a very oldskool kind of way. Here's the press release from one of the Sqrxz developers, phx;


"Sqrxz 3 is a (extremely hard) jump and run puzzle game for any Amiga with 1 MB RAM. The ADF image can be downloaded here: http://www.sqrxz.de/sqrxz-3/ (for free, of course). It is my personal favourite of the series with brilliant graphics by Simon Butler and a dozen of great soundtracks by Alexander Wiklund.

But we also created a physical release, with a small printed box (inside and outside), a small booklet with instructions (20 pages) and a labeled DD-disk with the game. The so-called "deluxe version" can be ordered for at least 9 Euro from us, to cover expenses. Any higher amount is allowed and takes effect as motivation for future games.

Note that these 9 Euro cover all expenses, i.e.: DD-disk, printed box, booklet, package materials, postage, shipping, ... everything. The game and our time is free.

There is just a single drawback: to keep it simple for us we will only accept orders from the EU. This has the advantage that the postage is low enough and the same for everybody and, most important, that you can pay with a SEPA bank transfer.
If you are interested, write me (frank at phoenix dot owl dot de) an email with the subject "Sqrxz Order". Do not forget to include the address, where you want to receive the package. After some time you will eventually get a reply with more details, like the account number of our team leader (Shahzad Sahaib) in Austria. When the money arrived, Shahzad will send the game to you. But you have to fold the box yourself!"

Check out the game below in a longplay compiled by Hipoonios...

For more information, and to download the game, head over to http://www.sqrxz.de/sqrxz-3/. Note, the YouTube video on the Sqrxz web site is the PC version.

Yes, it's been yet another long break between blog posts. Unfortunately life gets in the way, meaning that recently I've had very little time to devote to playing games on my trusty Amigas. I've been keeping up-to-date on all things Amiga 30 related, but I'm now in the process of catching-up on what I've missed in the Amiga games world.

First-up, and announced towards the back-end of July, was the news that Tales of Gorluth II is not only under development, but is also available for pre-order.

The original, voted as the best Amiga game of 2014 by many, was an ambitious Zelda, Link to the Past Clone, put together using the popular Backbone development system. While the sequel is also being put together using Backbone (meaning you'll really need an 030 Amiga or higher to play at a decent speed), developer Viddi reports that his new engine is faster.

Check out the trailer below, and listen to the fantastic music that accompanies it.

Along with the development announcement a limited to 200 copies Gold edition pre-order scheme was launched. Demand for this has been so great that all pre-order slots for this tier have now gone. Thankfully, a Silver edition is now available.

For more information visit the Tales of Gorluth web site at http://www.talesofgorluth.de/, where you can also pre-order the Silver edition.
Posted by Rob Hazelby at 08:10 No comments: