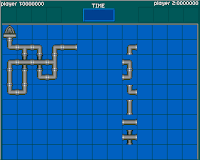 Originally released by The Assembly Line way back in 1989, Pipe Mania proved to be a simple but extremely addictive puzzle game, which eventually went on to be converted to numerous other computer and console platforms including the ZX Spectrum, BBC Micro, Gameboy, C64 and many more.

It's been a while since anything quite like it cropped-up on the Amiga, but thankfully it looks like this may be about to change.

"I started programming a pipemania clone in Amos in 1995. Anyway I recently started looking into getting back into it as this is a project I never finished.

I have started a bit of coding (Currently, nothing much whatsoever) but I am planning to work on this as and when I can.

If anyone is interested in helping out with gfx, sfx, music and suggestions, idea's etc please let me know.

Originally this was planned to be a basic 1:1 clone, but there is opportunity to improve massively on the original".

bippym plans to use this EAB post to track what he's achieved and also what he plans to do.

To do
The game
Ideas and suggestions
Various game modes, timed, 2 player vs, co-op, hardcore
Levels bigger than the display that scroll
Split screen 2 player
Splitter pipes in later levels with 2/3 exits
Pre-determined levels and maps
Randomly generated levels for that extra "fun" factor
Scoring options
Redo some/all gfx.
Have pieces that take up more than one square (2x2)
Remove criterion logo's and create a new one

I'll be reporting on the progress of this as and when updates appear. In the meantime, if you'd like to post feedback, suggestions or simply want to keep an eye on things yourself, get over to this post on the English Amiga Board.
Posted by Rob Hazelby at 09:00