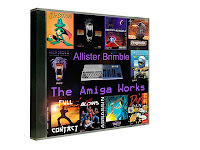 Allister Brimble's "Amiga Works" Kickstarter campaign has received a few mentions on here as I know many of you (including myself) are a big fan of his Amiga work.

The campaign's been running for a few days now, and Allister's decided to make the content of his forthcoming double-CD album that bit more interesting by issuing a challenge to any musically minded backers out there.

Here's Allister with the details;

I will be running a competition open to all backers who have pledged to buy the CD, either digitally or the physical copy.

You are invited to produce a remix of ANY team 17 game track written by myself. This should be to modern day production standards and CD quality. The winner will have their track appear on the album and be fully credited. They will also recieve 5 CD's for their efforts to give to friends and family and of course more if I make a second pressing over and above the initial run.

The second and third places will have their tracks on the USB stick and recieve one additional copy of the album each, and again more if I make a second pressing.

The tracks will be judged by myself only and the decision will be final.

Entries should be sent to allisterbrimble [at] gmail.com via a link where I can download the audio file from.

The current ETA of the album release is September 2013.
Posted by Rob Hazelby at 09:00