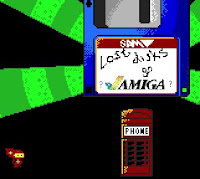 Today I bring news of yet another Amiga game in the works, and it's from a rather unusual computing platform. Moebius Goatlizard is a conversion of recently released SAM Coupe title, "Lost Disks of SAM".

Produced by Black Jet, they describe themselves as;

"...a bunch of bedroom programmers, designers, musicians, and retro game fanatics, trying to get more people enthused about the wonders and awesomeness of Retro Gaming!"

Here's Andrew, the programmer, explaining why he's porting this over to the Amiga;

"I'm in the process of learning the Amiga architecture and 68K ASM, so what better way to learn than to convert Lost Disks of SAM to the platform ;-) Very early stages, I'd like to draw inspiration from the EFMB PC Remake (have a look at RGCD EFMB for information on that piece of awesomeness and hopefully come up with some new ideas".

"Insatiable lust for all things cosmic brings Moebius to the world of Amiga where he must collect inter-galactic stuff to help feed his dirty collecting habit. Or something along those lines".

Below you'll find footage of the game in action, taken in early September (but a according to the development blog a fair bit's been added since then);


If you'd like to find out more, further information and a 4-level demo of the game can be downloaded from the Black Jet web site.
Posted by Rob Hazelby at 09:00