Here's One I Missed - Downfall (AGA) 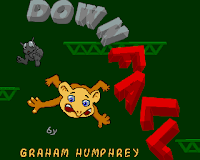 Starting this blog back in October has meant that I've a bit of catching up to do with regards to those Amiga games released earlier in the year. To not cover cover them in the Amiga Gamer blog seems a shame. Plus, it also gives me a chance to see what I've missed!

Based on an Atari Jaguar title of the same name, (which in turn was based on an Atari 2600 game) Downfall sees you take the control of a character who can only move left and right, but he can certainly fall with ease!

Check out the original Jaguar game in action below;


Clearly finding it rather addictive, English Amiga Board moderator, Graham Humphrey, decided to convert this over to the Amiga.

"As you will have gathered, it's a very simple platform affair but one based on falling, rather than jumping. As the platforms scroll up, your task is to stay on the screen without getting squished at the top, or falling to your doom at the bottom.

Although a basic concept (one livened up slightly with the addition of bonuses) it's a surprisingly tricky and compulsive idea that had me coming back for 'one more go' on an alarming number of occasions.

There is no reason a bog-standard Amiga can't handle something like this..."

Graham then spent the next 3 months coding an Amiga OCS version in BlitzBasic, taking in feedback from those following his progress thread on the English Amiga Board.

The game was eventually completed and released on the 9th of April, but rather than sit around and take a break, Graham soldiered straight on with the creation of a dedicated AGA version, with more colours and some parallax scrolling for good measure.

The AGA version retains the same gameplay as the OSC version, but adds parallax scrolling, an AGA title screen and a high score table, which saves to the hard drive when you quit.

Anyway, enough of the development history. What's the game like to play?

First, the control of the main character is absolutely spot-on. From the inertia of the player when he's running around the platforms to the speed at which he drops down, it's clear that either much time has been spent tweaking, testing and tweaking some more until the controls feel just right. They really are that good, and if you do find yourself plummeting to your doom then you'll only have yourself to blame. There's no excuse for cursing the controls here.

Next, is the difficulty, and this is possibly one point where the game falls down (slight pun intended) a little. The speed at which you drop doesn't increase as you continue your descent, and with no enemies patrolling the walkways extended play does become a little tiresome. I'll admit that after a few minutes I did find playing this a bit of a chore. This shouldn't be taken as a criticism of Graham's conversion, as Downfall on the Atari Jaguar suffers from the same issue.

A little variety comes in the form of pickups dotted around the game, which can double your score, increase your run speed, make you fall slower, etc. but these just aren't enough to provide much excitement, at least in a single player game. 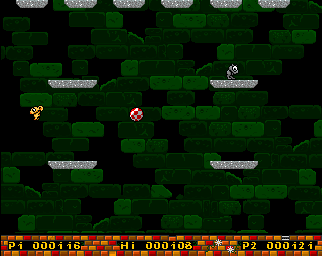 (Down, down, deeper and down)

Yes, Downfall AGA supports two players simultaneously, and it's this player versus player setup that provides the laughs, as you both fight, not only for the bonuses, but also to ensure it's not you who ends the game for the two of you by falling to your doom or getting squashed on the ceiling.

On to the presentation now, and this really is first rate. The English Amiga Board's Predseda has worked wonders with the graphics, while Reynolds has composed a cracking background soundtrack, backed up by wilshy, whose supplied all manner of weird and wonderful sound effects.

Naturally, much credit must go to Graham for coding the game itself. The game feels extremely polished, and the parallax scrolling in the background is super smooth. It's a shame more Amiga games didn't feature this back in the day, as it gives the game a nice console look.

As previously mentioned, the two player option is a fantastic addition. During development Graham could easily have said "sot it" and not bothered putting it in, but in it went, and it really makes the game. Finally, the ability to save your scores to hard drive is an excellent touch, meaning you'll be wanting to return for that one more go, in an effort to try and beat your previous best.

And with that, I'm off to have another go myself.

The OCS and ECS versions of Downfall can be downloaded from http://downfall.mikendezign.com
Posted by Rob Hazelby at 09:00