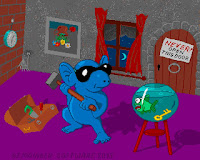 It was only a few days back that I finally had chance to play and review Remainder Software's last release, Downfall AGA. (If you missed that, you can find it HERE).

In today's post I bring news that work on their next title is well underway, and all being well, it's due for release some time in 2013.

Here's the recent press release posted on their Facebook Group;

After a period of nothing much happening, we're developing a brand new game now. It's in its very early stages so don't expect anything until next year, but more details will be released when it is appropriate.

In the meantime, we have a nice between-level/loading screen for you to stare longingly at :) (And it will all make sense in good time!)"

While you wait for Remainder's next release, you can follow them on Facebook by going HERE, and download OCS or AGA versions of their previous game, Downfall, by visiting their web site at http://downfall.mikendezign.com/
Posted by Rob Hazelby at 09:00