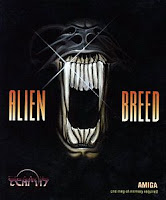 Regular readers of the blog will know that I've given this a mention a couple of times over the past couple of weeks, but late yesterday evening Allister Brimble's "Amiga Works" Kickstarter finally went live.

For those of you who may not be aware, Allister was one of the most prolific of all Amiga game music creators, having produced tracks for titles such as Alien Breed, Superfrog, CJ's Elephant Antics, Project-X, Fantasy World Dizzy, and many, many more.

Allister now plans to release a double CD pack containing modern studio remixes of some of his best known tracks.

At present, a final tracklisting has yet to be decided, and Allister is even asking fans to contact him with suggestions relating to what should go on the album.

The album artwork is also having loads of attention lavished on it, and those making donations which cover boxed versions of the album will be pleased to know that an exclusive piece of CD booklet artwork is being commissioned;

The artwork will be created by Rico Holmes, the artist behind the Team 17 graphics.

You can pledge any amount towards "The Amiga Works" Kickstarter project, with £15 being the lowest amount where you'll actually receive something - 2 CD's equivalent of tracks in MP3 or FLAC.

The most popular price range at the moment seems to be the £50 level, which gets you one signed copy of the album, a download code, a signed copy of Allister's excellent "Sounds Digital" CD album, a poster, and finally, a USB stick containing all the CD tracks and all the original Amiga MOD files.

Be aware that out of all the donation levels, this is the only one that's limited (to 40), and at the time of posting this there were only 26 remaining.

As a massive fan of Brimble's work I can't wait for this album to see the light of day. However, with a September 2013 release date I'll have to hold on just that little bit longer. The wait will be worth it, I'm sure.

For more information and to make a pledge, please visit Allister's Kickstart page.
Posted by Rob Hazelby at 16:47