3 Atari Classics Ported to the Amiga 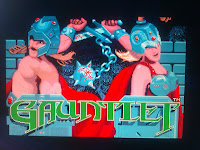 (These ST to Amiga conversions have been available to download for a number of months now, but this is the first time I've actually got around to installing them on my system)

Gauntlet, Super Sprint and Joust were just three of many titles that appeared on the Atari ST, but for one reason or another, the Amiga was never graced with their presence. Until now...

How? Well, thanks to the wonderful coding and conversion talents of English Amiga board member meynaf, he's taken the Atari ST versions, and after much technical wizardry, has got them up and running on the Amiga.

Not only do they work on the Amiga, but they run perfectly, and are hard drive installable.

So, the question you probably want answering is "What are they like?"... 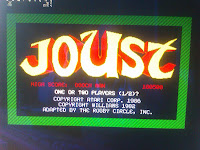 Let's start with Joust, as out of the three titles this was the game to appear in the arcades first.

Visually, it's really nice, and appearance-wise stands up extremely well against the arcade version, but I found the sounds really annoying, and after less than a minute I was reaching for the speaker volume knob.

Also, I'll admit that I'm pretty useless at Joust, and struggle to get more than a few levels in on the arcade version, but on here I found the main character far too "floaty", and I spent more time trying to keep control of him and his ostrich than I did skewering the enemies with my lance.

The other problem I encountered was that the only way to control your character was with the cursor keys. Being a port of an arcade game this is a title that deserves to be played with the joystick (or at the very least, a joypad!). A joystick control option may exist, but I couldn't find it.

After 10 minutes of battling with the controls and wincing at the awful sound it was time to move on to Gauntlet... 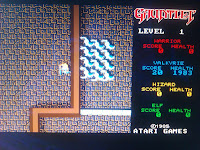 I'll admit that I was quite excited at the prospect of playing this on the Amiga as I'd spent many happy hours playing the sequel, Gauntlet 2 on my machine. With a third and fourth player joystick adapter plugged in, and a full party of adventurers it's given me some very happy gaming memories.

Things get off to a great start with a fantastic re-imagining of the arcade machine's title screen, and a great intro tune. Full marks for presentation here.

Pressing enter starts the game, and brings you face-to-face with the first floor of the dungeon. At this point you can not only choose you character, but also control method (keyboard or joystick).

The graphics here are bright, bold and have been converted very well from the arcade machine. If I had to make any complaints I'd say that the reduced colour palette makes things look a little washed out, and I did find the scrolling was a tad jerky and a little uncomfortable on the eyes.

Anyway, these are tiny grumbles for what really is a fantastic arcade conversion. It looks good and sounds great, and I've no hesitation in recommending you get this one downloaded and installed on your Amiga. 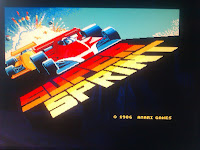 Finally, it's over to Super Sprint, and out of these three titles it's the game I've had the most fun with.

Like Gauntlet, this has a lovely looking title screen, and this high level of presentation doesn't let up.

Just like the arcade it spawned from, this supports up to three players, albeit using a combination of joystick and keyboard to support this many inputs instead of three steering wheels.

Also like the arcade, the graphics look basic, but are nicely drawn. The cars themselves are beautifully animated, handle brilliantly, and within a few minutes you'll be racing down the straights, zooming around corners and passing other cars. Then you'll get cocky and plough into the track below as you mis-judge one of the bridge jumps.

With a good selection of wonderfully designed tracks, powerups available to purchase, and a nice difficulty curve, this is without a doubt my pick of the three ST to Amiga conversions. It's such a good game that I'm amazed it was never ported over to Commodore's 16-bit platform.

Now, before you go off and download these games, you need to know what the system requirements are. 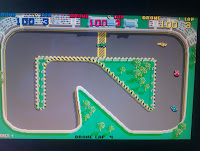 On his web site Meynaf suggests an unexpanded Amiga 1200 should be enough to run Joust and Gauntlet, but thinks that the 7mhz CPU found in 68000 based Amigas will be too slow.

System requirements for Super Sprint are a little higher, and a 25mhz or higher CPU is recommended for full-speed play due to the game opening a 64 colour screen to emulate the ST's palette changes. It also needs a system with higher specs to run because the ST screen conversion is carried out each frame.

Anyway, enough of the technical specifications. Hopefully my brief overview of these three titles has spurred you on to get these up and running on your own system. So, without further ado, I'll let you get on and download them.

All three titles can be downloaded from Meynaf's website.

If these games have whet your appetite for future ST to Amiga conversions you're not alone. Already, members of the English Amiga Board are suggesting future titles to port over to our favourite machine, with International Karate being the current favourite.

Whether Meynaf has the time and inclination to port any other games over, only time will tell.