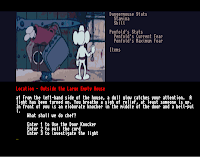 Regular readers to this blog may recall that earlier this month I reported on a new Dangermouse game, which was now in development.

Since then, author Christian Clarke, has been hard at work on the the game (titled "Dangermouse Adventure - Greenback's House of Torture"), and on Monday he posted the following project status update to his web site, amigapd.com

"Have now completed 386 out of 400 location descriptions. The remaining descriptions relate to the end sequence.

The attention now will move to the luck / fear and combat routines.

Will also try to add a save routine to make game testing easier.

Overall probably still about 5 months of work to go".

I didn't expect to hear anything more from Christian for at least another week or two, but yesterday he commented on Facebook that;

"Have now got the combat routine working - need to add some more varied descriptions - first task is to enter all stats for enemies encountered and get graphics for them too".

Christian was also kind enough to upload some new footage showing the combat in action.

As soon as I hear anything further about the project I'll post it here in due course. In the meantime, you may like to check out the official project development pages over at AmigaPD.com.
Posted by Rob Hazelby at 09:00