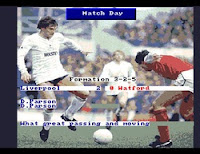 Today I bring you some news of an update to AmigaPD's 1980s Football Manager game, plus early details of a follow-up.

The latest update to the 1980s Football Manager sim means that the game will now run directly from your hard drive. Christian of AmigaPD had been encountering problems getting this to work on a real Amiga, despite it working flawlessly on an emulated one. Thankfully, with a bit of help the problems have been resolved. Here's Chris to explain;

"Big thank you to Amy Worthington (Mrs Beanbag and creator of the wonderful Mr Beanbag game) for answering my question on the EAB forum.

We now have a hard drive version of 1980s Football Manager which I've just tested on my Amiga 1200".

To download the hard drive installable version of the game simply pop over to the latest 1980s Football Manager AmigaPD blog post.

Moving on to the sequel to the 1980s Football Manager game, and at present progress is at an early stage.

Christian's currently toying around with different graphic styles, and trying to settle on something he's happy with. Below is a mock up screen, about which he made the following comments;

"[...]quick attempt at trying to create a new cartoon style for the Football Manager sequel. Originally I wasn't as happy with this one, but it is growing on me". 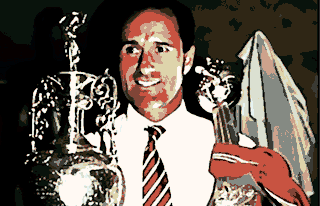 As always, I'll print further news on this project as and when it surfaces.
Posted by Rob Hazelby at 09:00