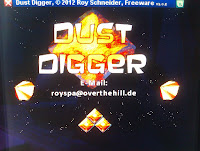 Designed and coded by Roy Schneider, Dust Digger was originally released for mobile devices way back in 2004.

Earlier this however, Roy started to convert the game over to the humble Amiga 1200, and this weekend what looks to be the final version was uploaded to the Aminet.

Dust Digger may be a Boulderdash clone, but it's one of the most polished I've seen on any of the retro systems, and back in the day you wouldn't have felt short-changed had you bought this on, say, the £2.99 budget label "The 16 Bit Pocket Power Collection". Remember that range?

The intro screen looks great, featuring a lovely logo, two spinning filled vector diamonds, a nice jolly tune and an "into the stars" background for that classic Amiga look.

Press fire and the title screen fades out and your're straight in on level one. 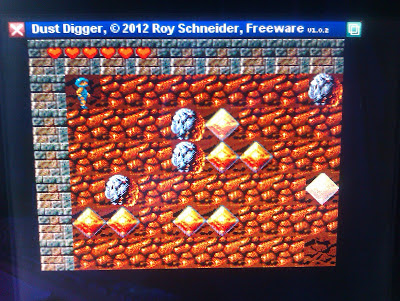 (Here's where your adventure begins)

It's at this point that I should probably point out that I can only assume this is the first of many levels, as I found the difficulty level so punishingly hard that after many attempts I'm still unable to get off the initial starting stage

My inability to complete stage one is most likely down to my poor gaming skills, but I found that the green spider enemies simply moved too fast, and on many occasions, almost as soon as they appeared on screen I'd been killed.

Lose a life and you're taken back to the start of the level and everything resets, meaning you need to start your diamond collecting and spider killing all over again.

With this in mind I've found the best way to play is to slowly tiptoe my away around the level. It does make for a slower gaming experience, but you'll find you last a heck of a lot longer! Besides, there's no time limit, so you can afford to be cautious. 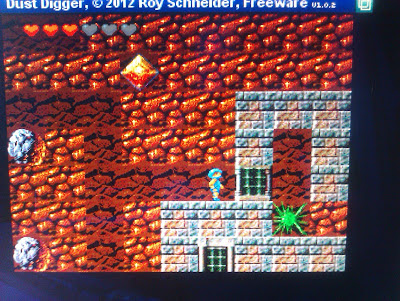 (One of those ruddy spider things!)

Grumbles aside, I still found Dust Digger to be a lot of fun. It's clearly had a lot of time and care spent on it, the controls are spot-on, and it does have that "one more go" factor, which is always the sign of a good game. Saying that, unless you have snake like reflexes you may find that you'll be stuck on the first level as I am.

Download the game from the Aminet HERE, and once you've had a few goes please drop Roy, the author, an email and let him know what you thought. He's produced a number of other mobile games over the years, and perhaps with some decent feedback for Dust Digger it'll convince him to port further titles to the humble Amiga.

If you've downloaded an earlier version of this game, and you have an accelerated Amiga it'll run too fast. This version fixes that issue, and also features a kill player option [the help key] should you become trapped)
Posted by Rob Hazelby at 11:04