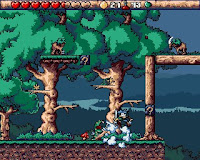 Here's a game that until a few weeks back I'd never heard of. Going under the name "Nuxelia", fellow English Amiga Board members and myself were given the heads-up on this by vitux, who only recently had decided to register.

The game is a gorgeous looking AGA only platformer, with lovely parallax scrolling, a real polished look, and it's extremely playable.

The only downside to all this is that it looks like it didn't progress past a demo release.

Here's the original message by vitux, posted to the EAB;

"Hello, I've been looking at this site for several years and I finally registered.

I have Amiga since '91 and I've gone through different models.

My first post is about the game unfinished Nuxelia-Adventures of Paelon, I think this game went unnoticed, no references on the web just does not exist in HOL, no video on YouTube (until I uploaded myself) and here had not spoken.

As seen in the video, looks great. Does anyone know anything? Came to be finalized?" 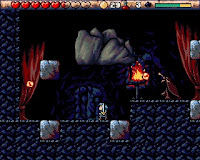 EAB forumites were quick to get the game installed on their systems (a mix of real and emulated), and the feedback came thick and fast.

A few people experienced "out of memory" issues, and this was identified as the game requiring all chip RAM available. I also had this problem, and managed to get the game up and running by installing it to my hard drive, rebooting the A1200, and booting with no start-up-sequence.


If you'd like to get the demo up and running yourself, you can find it, and an archive of screenshots at the following locations.

So, is the full version of this game destined to be lost forever? Well, hopefully not. vitux is currently in the process of contacting the author of the demo, and all being well further information relating to this project will surface soon.

In the meantine, those who can read German may want to read a preview of the game featured in issue 20 of Amiga Future Magazine (Issue date 7th April 2008).
Posted by Rob Hazelby at 13:31