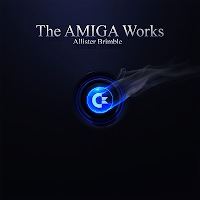 Musician Allister Brimble is the man behind some of the Amiga's most iconic game tunes. Working on titles such as Alien Breed, Project X, Full Contact, Troddlers, and many more, if you did or still do play games on your Amiga, then you'll have certainly heard some of his output.

Following a successful Kickstarter campaign last year, Allister released his double-CD album "The Amiga Works", earlier this month to much acclaim from the Amiga fanbase. Such was the celebration for this new release that fans were posting and uploading photos of the album upon its receipt.

Limited to 1,000 copies, supplies are now running out. Here's the man himself;

Down to the last 150 copies of my limited edition Amiga Works double CD album now..

Head to www.amigaworks.com to get your copy"


It's likely that these copies will go quickly, so if you want to add this to your collection you'd better get your skates on!
Posted by Rob Hazelby at 08:00