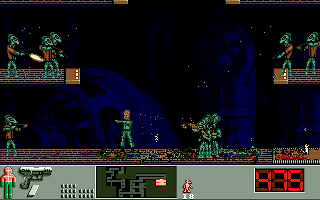 This Christmas is proving to be an exciting one for Amiga gamers. First, Putty Squad is finally released to the public, and then hot on its heels comes platform shooter "Enemy 2".

The original, "Enemy: Tempest of Violence", German language version, was published by Anachronia way back in 1997, with an English version published by Alive Mediasoft in 1999.

Unfortunately, regardless of its quality, this was a title that came too late in the Amiga's commercial lifespan to make much of an impression on the gaming scene.

Years later the author of Enemy 1, Andre Wuthrich, was kind enough to release the game into the public domain.

Before you download and start playing Enemy 2 the authors recommend that you play through Enemy 1 first if you've not done so as the the story in part 2 continues where Enemy 1 left off.

For more information and links to download both parts 1 and 2, point your web browser at the Anachronia web site.