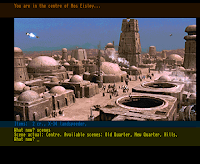 Those of you who grew up playing classic text adventures such as The Ship of Doom and The Hobbit, may be interested to learn that a new text adventure has just been released for the Amiga.

"Star Wars: Escape From Mos Eisley" is described by its author, Umpal as "Nothing special", and is his first Amiga release.

The game was originally announced on the Amiga.org forums, and so far discussion in the thread seems to be more concerned with copyright than the game itself. This isn't totally surprising when you consider the problems the author of Smurf Rescue encountered with his Amiga homebrew release.

If you'd like to find out more about the release (or join in the discussion) check out this thread over on the Amiga.org Forums. You'll also find a download link there.