It Had to Happen - Flappy Bird Lands on the Amiga 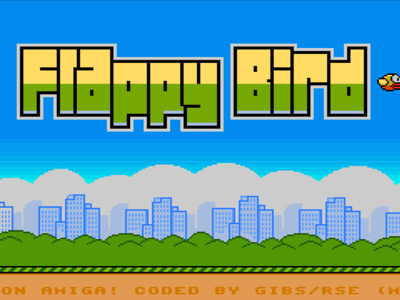 With the humble ZX81 receiving its very own version of the worldwide mobile gaming hit "Flappy Bird", I did wonder how long it would take until someone converted it to the Commodore Amiga. The answer? Not long.

I first received a heads-up that this was coming to our favourite gaming platform earlier in the week when Lemon Amiga posted up a YouTube link to a work in progress version via their Facebook group. What I didn't expect was that the finished version would be released so soon after.

Coded by Michael Gibs, this is a conversion of Nguyen Ha Dong's mobile title "Flappy Bird", which, although released in mid 2013 gained massive popularity earlier this year. By the end of January 2014 it was the most downloaded free game in Apple's iOS App Store, and was earning its developer a whopping $50,000 per day from in-app advertising! The completed Amiga version was uploaded to the Aminet on Thursday, and you'll be pleased to learn that it's free of any advertisements.

Below is the game in action, running on Michael's Open Pandora device;

There's no mention that this is AGA only, but Michael does state that you'll need a 12mhz system or better for this to work properly.

If you'd like to download Flappy Bird Amiga for yourself you can find the official web site here and the Flappy Bird section on the Aminet here.

My thanks go to Lemon Amiga for the initial heads-up and to the Amiga Impact Team for pointing me in the direction of the official Amiga Flappy Bird web site and Aminet link.