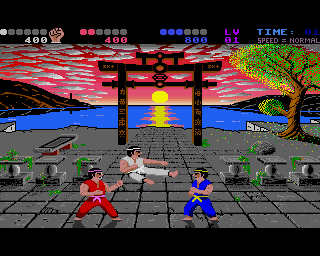 This latest addition to the ever growing Lemon Amiga YouTube video library is the legendary beat-em-up International Karate+, from 1988.

What makes this review "Extra Special" is the amount of effort Dan over at Lemon Amiga has put into this production. Dan contacted me earlier in the week, telling me;


"This weekend is EXTRA special, because it features IK+; a review I've been working on for two months solid. It's one of my favourite playguides so far"

The amount of effort in this production really has to be seen to be believed. The video kicks off with a detailed lowdown of the 16 moves available to you, complete with close-ups and joystick movement diagrams, before then moving on to the game itself.

Throughout the 26 minute documentary we're treated to not only the usual tips and tricks you'd expect from a Lemon Amiga video, but also music track comparisons with the C64 version, easter eggs, snippets of trivia appearing on screen, and even screens within screens comparing IK+ to other titles.

The commentary throughout the production is also interesting and informative to listen to. There's no waffle, and it all sounds like it's coming from a carefully planned and tested script.

If you've yet to watch a Lemon Amiga video then make this your first. If you're a regular viewer then you'll certainly find this the most polished yet.

Check out the Lemon Amiga video below.