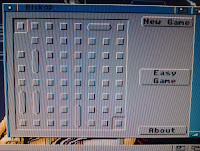 Seeing as new versions of three puzzlers, Blokop (see screenshot to the left), Ice Dungeon and MLink had just been uploaded to the Aminet I decided to take the trusty A1200 online, get them downloaded and installed, ready for further investigation.

All created by French Amiga coder, Charles-N. Jacob, the three titles are small games that run in a Workbench window, and will apparently run on systems with Workbench 1.3 or later.

First-up is Blokop, a simple puzzle game, where the goal is to move your block from the starting point, all the way to the exit on the other side of the board. Clicking a blank space moves either your "character" or one of the other blocks into that space.

With a large playing area, and blocks that are more than one block in size, it's a slightly more advanced version of those block-sliding puzzles you used to play when you were a kid. Unfortunately, it's just as boring. 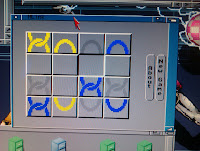 Talking of block-sliding puzzles you used to play as a kid, if we move on the Mlink, this is exactly what you get. Here you have a small grid where the object is to move the blocks around to complete the pattern.

I don't know if I was doing something wrong in this game, but I'm sure on occasions I was clicking on blank spaces in an effort to move a tile, but absolutely nothing happened. Poor coding or user (me) error? I'll let you decide! Another game to play for only a minute or two before moving on.

The final game in this puzzle series is Ice Dungeon, and it's the most advanced out of the three titles.

The game is a VERY basic Dungeon Master clone, where the object is to collect the talisman on each of the 7 levels, and then reach the exit before you freeze to death.

Movement is made using the simple GUI, which you click, first to choose the direction you wish to face, before clicking the MOVE button to move in that direction. 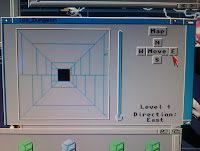 The map window (which sadly can't be used at the same time as moving) helps to keep a track of where you've travelled on the current floor, but with every part of the level looking so similar even with the map you'll be getting lost and frustrated.

So, are these games worth your time? Well, I have to say that at present, even the best of these three titles, Ice Dungeon, is just too basic to keep you entertained for more than a minute or two.

The two sliding puzzle games, Blokop and Mlink, could be improved with some nice tunes playing in the background, and perhaps a few more colours. Time limits would also make the games much more exciting to play, as at present there's just no challenge.

Ice Dungeon has the basic building blocks for what could be a fun, lighthearted dungeon romp. If the graphics were given some more variety, sound effects and enemies were added, and if you were given ability to fight back, this could be worth more than a passing glance

If these titles receive updates I'll certainly take another look at them. In the meantime, if you'd like to download and try the games for yourself, you can find them here: