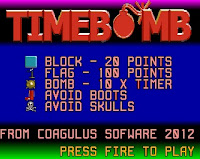 On Thursday I reported that an Amiga conversion of the Spectrum classic "Timebomb" had reached a playable beta stage, and was now available for download.

Since then, the author, Coagulus, has listened to feedback, and has been hard at work coding and tweaking. The end result is that the beta has been replaced with a final completed version.

To announce the release of Timebomb Amiga, here's the message Coagulus posted over on the English Amiga Board;


"Think I've ironed out as many bugs as I can so this is the final release (unless another set of bugs crops up). I think I fixed most of the in game flickering and added a help page that is on the titlepage.

The game should work on all Amigas with at least 512K chip ram. If there is only 512k of chip then a smaller version is loaded (less sfx, smaller music and less titlepage gfx).

Game should run from HD but you'll need to assign timebomb: to its folder

I've not yet got around to downloading the game and trying it myself, but having many happy memories of playing Timebomb on the Spectrum I'm looking forward to giving this a go.
Posted by Rob Hazelby at 09:00