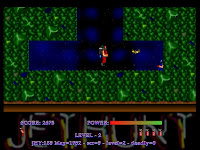 With the conversion of classic Spectrum arcade puzzler TimeBomb, now complete it looks like work on another Amiga game is now underway.

Coagulus, the lone programmer of TimeBomb, is keeping the momentum going by starting work on converting one of his Windows games over to the trusty Amiga. The game is a tribute to John Van Ryzin's legendary Atari 2600 game "H.E.R.O" (Helicopter Emergency Rescue Operation).

As this conversion is at such an early stage there's currently little information available regarding this project, but here's what Coagulus tells us;


"This game was envisioned by me in 1992! 20 years later and the game is finally out for Windows 95 and above. A tribute to HERO and it's bloody hard.

After finishing JetHunt (still have to do a little bugfix release but it's done) I felt guilty that the computer I'd done most of the work on, the Amiga had been denied this game. I've decided to convert JetHunt back to that wonderful machine.[...] And I've started it!"

Here's hoping the Amiga conversion doesn't take anywhere near the 20 years it took the PC version to appear!

For more information and links to download the PC version of JetHunt, get yourself over to Coagulus' web site.