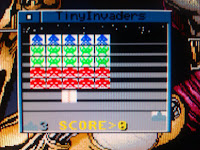 Over the past few months I've seen the name "Tiny Invaders", appear on the "Recent Aminet Uploads" list on a number of occasions. When it appeared yet again a couple of days back I finally decided to give it a download to see if it was any good.

To be honest, I wasn't expecting amazing things - especially when the author himself comments in the readme that;

"This is my poor idea of a SPACE INVADERS clone for all the Classic AMIGAs".

A quick download and un-archive later and I had the game running on my Amiga. Tiny Invaders runs in a window, but it's the smallest game window I've ever seen. I'd (wrongly!) assumed that the game got its name due to how small the package was. Nope. It gets its name from how small EVERYTHING is! (You can press Z to double the screen size if you wish, though)

If you look at this blog post thumbnail you can't get any idea of the window's scale as I took that with my mobile phone camera a mere inch or two from the screen. What you need is a photo showing my entire desktop and how it looks on there. 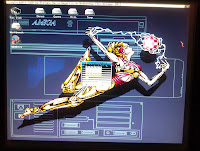 That's it in the middle!

Still, size isn't everything, as they say. What's the game like? Well, the invader sprites are certainly authentic. They've been copied pixel-for-pixel from the arcade original, so at least they look the part. The problem is that each enemy has a massive block around it, and that same issue also crops up with the bullets and your laser turret. This gives the game a very strange look, makes avoiding falling bombs difficult and aiming accurately at the invaders just as hard.

Speed and controls are the other issues you'll encounter when playing this. I've installed the game on a 50mhz 030 with 34 megs of RAM, and the game crawls. Meanwhile, controls seem to operate in as much the same way as if you were typing into a CLI window. What do I mean? Well, you know if you hold down a key there's a slight pause after the first instance of that letter before a string of them appear? That's what happens here. You hold left, your turret moves one pixel to the left, stops and then commences movement again. Not only that, but the game 'buffers' your movements, so if you hold a direction for too long your turret continues to move long after you've released the key.

The above most likely comes across as really negative, but it shouldn't be taken as that. You can clearly see that the author's using this little project as a way to get to grips with programming a game on the Amiga, and for that I salute them. What's here is already a million times better than anything I've ever produced.

The programmer of Tiny Invaders clearly has some talent. The background image used in the main game is a simple one, but helps to give it that classic look and a sense of depth. Elsewhere, and the way the instruction text appears is quite funky, albeit slow. Of all the small touches my favourite has to be the pause. If you click out of the window the action stops. You can still hear the alien 'marching', however it's only barely audible. Click back in, the action resumes and the volume returns to previous levels. Nice.

The game also features a tune, but strangely you only get the option to listen to it when you're attempting to quit the game. It's a rather odd thing to do, and the tune would be better placed on the title screen.

With the game receiving regular updates it's a title that I'm looking forward to following the progress of. It's fun watching a small game like this come together, and with the Amiga crying out for new games, the programmer should be commended for putting the effort in and getting the game to this stage.

If you want to download the game yourself and give it a go, point your browser at:
http://aminet.net/package/game/shoot/TinyInvaders

Let me know what you think.
Posted by Rob Hazelby at 09:00