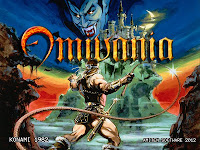 I originally gave Amiten's Amivania project a brief mention in the run-up to Christmas, when I took a look at a number of projects he was currently working on.

Back then the game looked like a hybrid of NES and Super Nintendo graphics, giving the game an unusual, but eye catching mix of 8 and 16-bit graphic styles.

Since then Amiten has been hard at work on his project, and it's safe to say that it's really starting to take shape, as this clip below shows;


Here's Amiten with a few words;


"This is a remake of the famous saga, [Castlevania], [by] Konami.

This time Richter is once again embroiled in a battle with the forces of evil where you have to fight demons, ghosts and other creatures sent to derail our vampire hunter ...

The game is designed from sprites and backgrounds of several titles, from the legendary saga from Super Nintendo versions to stuff [from] the Last Lord of Shadows or Mirror of Fate, so fun is guaranteed as far as visuals are concerned.

The game features a screen resolution [which] in this first level has a background of 1000 pixels wide by 256 high, all with the lowres [...] resolution mode that offers more colors on screen or mode super EHB 32 + 32 Opaque Bright Colors, [making] the game look very copper above normal to 32 games or 16 colours that are very abundant in Amiga. This coupled with [...] fluid [...] hardware scrolling, 50fps in which we can go [along] the map from right to left and back again so that we have [enough] space [...] to kill all the enemies.

In the sound section we have a remake of one of the themes of the series in question Castlevania: Dracula X, for [the] Super Nintendo. The music [uses two sound channels] with effects sampled by the two remaining channels. [This gives us] 4 channels of sound [...].

As for the gameplay, I tried everything I could [to]] debug the fluidity of movement and [improve the] collision detection, so the answer is the best and fastest way. This is one of the most difficult [aspects] to program in almost any game[...]. The dynamics of the game [are to] eliminate a certain number of enemies [before] we can confront the Dragon who is [at] the [end] of this first level.

[There is] still work to do. I want to say that [there is] only one person [...] behind all this development. [I will use] all my knowledge and [free] time, [but] always bear in mind that one person [is working on everything in this production]. I do not pretend that this game [will be] a blockbuster."

The original and full post can be found at the following location over on the English Amiga Board: http://eab.abime.net/showpost.php?p=862241&postcount=1

Elsewhere, you can check out the Amivania blog, over at: http://amivania.blogspot.com.es/
Posted by Rob Hazelby at 14:57