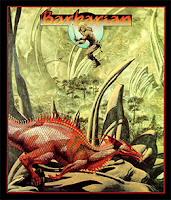 Barbarian, by Psygnosis, was one of the first Amiga games I ever played, and I must admit that I didn't find it a particularly enjoyable experience. Sure, you could use a joystick to control your main character, but to access the full range of functions available (run, pick-up, jump, etc.) you really needed to use the bizarre mouse-controlled icon method if you expected to make any progress at all.

While the control method was certainly novel, it was also extremely difficult to use, due in most part to the terrible 'tank' mouse bundled with the Amiga 500. You'd either not get to the relevant action icon in time, or the mouse click would fail to register. Because of these control issues, Barbarian was a game I quickly gave up playing. Opting to play one of the many joystick controlled titles released for the system instead.

And so, Barbarian remained pretty much un-played on my Amigas until a week or so back, when for some reason I though "Now that I've got a nice optical mouse plugged into my 1200, I wonder if the game is now actually playable?", and so Barbarian once again got fired-up.

Upon loading the game I was greeted by the beautifully animated, but short, intro sequence, which sees your barbarian character raising a sword above his head, before slamming it down onto a chain, slicing it in half. With the chain broken, the Barbarian logo zooms out of the screen. It's all very nice, and the team behind the game must have really thought so, as you're forced to watch it twice! 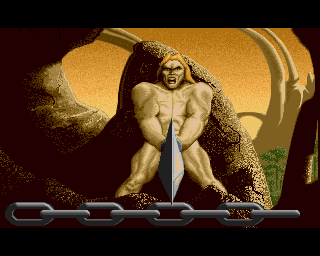 The intro, which you WILL watch twice!

With the intro finally out of the way (for the second time!) the game begins, starting with the player standing in the middle of a dank swamp. The only option here is to walk right, and it's then that memories of the game's odd chug-scrolling flip-screen method come flooding back. When you get to the edge of the screen the action doesn't immediately flip to the next. Oh no. Instead, all action stops, as the screen 'chugs' to the next, before everything then resumes. It's not a brilliant method chosen by the programmers, as it brings with it pauses in gameplay. A bit of a shame they opted for this, to be honest.

It's probably at this point that I should mention how much more responsive your character is once you're armed with a decent mouse, as you'll no longer fail to get to the relevant icon in time or fail to have a click registered. Sure, the control method is still rather odd (although, it could work brilliantly on a tablet display, I bet!), but at least now you stand a bit more of a chance! 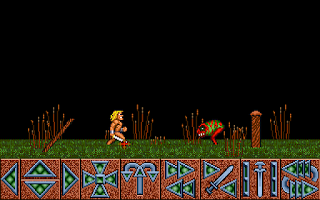 The second screen, and death is mere seconds away!

So, with the control method improved, what's the game like? Well, time's not been too kind to Barbarian, and if I'm honest, I'm not that sure if it played that well even back in 1987. The main problem is, that like the Rick Dangerous series of games, which appeared later in the Amiga's history, you have no chance of avoiding the majority of deaths your character will undoubtedly meet. Playing the game is a case of entering one screen, getting killed due to some hidden trap or charging creature, remembering how/why you died, conquering that screen on your next attempt, and then repeating.

It's clearly not just me who feels this way, as the below quote from the August 1987 issue of CU Amiga shows;

"...the only way to succeed is to play the game and gradually discover the tricks and pitfalls as you go along; for instance, there are various disappearing floors which no one could anticipate until you have been there once".

Grumblings aside, I must admit that once you're armed with a decent mouse, the game is actually quite fun to play. I can't ever see me actually completing it, but now that I've improved the control method greatly, it's not really a bad little title. CU Amiga gave it a 6 out of 10 in their review, and while I think that's a little harsh (I'd probably give it a 7), it's certainly not one of the greats released for our favourite computer.

The Recorded Amiga Games team have put together a nice walkthrough of Barbarian, which you can find below;


Give the game a go and see what you think. Happy clicking!
Posted by Rob Hazelby at 11:34