Discovering The Joys of "Fayoh 2" 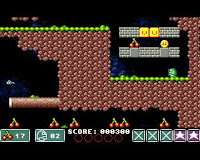 One of the many things I love about the Amiga is that even after owning a machine for over two decades I'm still stumbling upon games that, for whatever reason, I missed when they were originally released.

My most recent discovery is the 1998 release Fayoh 2, an AGA only platform arcade adventure, which, although worked on by a number of bedroom programmers, has been polished to an extremely high standard. I'd actually go as far as saying that if you paid £14.99 or £19.99 for this back in the day you wouldn't feel cheated at all.

The game begins with you entering the main tower of Don Jockface (this is what it says in the instructions!), a room filled with numerous mirrors that lead to strange areas of the black gum's home. Entering an unlocked mirror is as simple as moving your character in front of it, and then pulling down.

Once you've entered an area you're unable to leave until you've found all the hidden stars located there. Once that task's complete you must return to the mirror you used to enter, and you'll then be returned back to the main tower, ready to enter the next section.

At the bottom of the tower you'll find two very special mirrors. The first enables you to save your progress in one of the three save slots (yes, the game is so big that saving your progress is essential), and the second is a bonus room, giving you the chance to trade your points against extra lives.

The author describes the game as a Super Mario World clone, but I'd disagree. With the maps laid out as they are you'll often find the need to return to areas you've already visited, either to exit the level or to collect items you missed when you first passed through. To me it has the arcade platform feel of Super Mario World and the adventuring aspect of the Spectrum classic Jet Set Willy.


As you can see from the YouTube footage above, the game looks beautiful, and very console-like, with bright colours and some lovely parallax scrolling, a feature so often neglected on the Amiga. Music is also to an extremely high standard, with what seems like a massive number of in-game tunes, which sound great and really add to the atmosphere.

The controls also seem to have had a lot of love and care put into them. Your character has a small bit of inertia, but is really easy to control, and best of all it's fire to jump and not up!

Staying on the subject of the controls a moment longer, and this is where the game offers some real variety. One level you'll be running and jumping your way around, the next you'll have picked up a helicopter power-up and be hovering about the game, and the next you'll have transformed into a fish, and descending into the depths. This differing set of control schemes all work really well, and peppered throughout the game ensure that things are kept fresh and interesting.

Surely the game must have some negative points, and it does. The difficulty level is set extremely high, and clearing many of the areas may see you pulling your hair out after you die time and time again. The other issue is that when you die the area you're in gets completely reset. So, if you've just spent the last five minutes collecting every cherry, bonus and killing every monster, you're going to have to do it all over again. 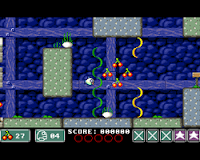 My final gripe is that sometimes it's difficult to work out what will kill you and what won't. Sure, you'll only make the mistake once, but what I thought was a yellow platform turned out to be a pit of lava, and a stretch of water which looked innocent enough soon lost me a life.

Minor niggles aside, I'd rank this as one of the Amiga's best platform games, and one that deserves your attention as soon as possible. It's a real shame the author has long since abandoned our favourite platform, as he has some serious talent, and it's a big loss to the Amiga scene.

Those of you who are after further reading may be interested to learn that you can find a fascinating interview with Fayoh 2 programmer, Marcus Johansson over on the AmigaPD web site. The game was also AmigaPD's "Game of The Month" for June 2011, of which you can read about here.

If this blog post has whetted your appetite, you can download the full version of "Fayoh 2" from The Aminet.
Posted by Rob Hazelby at 10:33