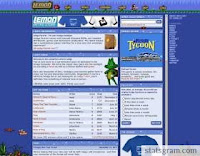 In Sunday’s blog post I gave a brief heads-up on Lemon Amiga’s latest video production “The Top 10 Worst Amiga Games”, and pointed you in the direction of the trailer and links to the PayPal page.

Why a PayPal link? Well, this time a small donation was being asked for before you could access the full video. Sure, the amount requested was only $3 USD / £1.89, but was it worth the money? It was time to find out...

Upon starting the video you’re greeting with a nice intro sequence featuring numerous characters from many classic Amiga games. This is all complimented by some nice mod music, and rounded off with the Amiga’s “Say” application providing the voice-over.

Dan from Lemon Amiga then chips-in, gives some brief background information about this latest video, and explains that Matt “Matt Chat” Baton and Filmnstuff will also be reviewing titles for this production.

So, what of the titles? Well, I don’t want to spoil things and reveal the 10 games nominated as “The Top 10 Worst Amiga Games of All Time”, but compared to some Amiga games I’ve had the misfortune to play during my years as an Amiga owner, a number of the titles shown in the video are nowhere near the standard of the Amiga’s worst. That said, there are some truly terrible titles that have made it into the Lemon Amiga top 10, and deservedly so!

Having watched numerous Lemon Amiga videos I was already familiar with Dan’s style of commentary and reviewing. Call me boring, but I like the way he covers a title. His voice overs are clear, informative, and reviews are often peppered with nice nuggets of background information about each game.

Moving on, and Matt “Matt Chat” Barton’s review style is similar to Dan’s. It’s well paced, comes across as having spent time researching each game, and again is full of tidbits of information about each title.

Finally, there’s Filmnstuff, and it’s here that I struggled somewhat. His reviews have more of a comedy slant to them, and along with the vast amounts of swearing in them, just seemed really out of place when sat amongst Dan and Matt’s reviewing style. I enjoyed the comedy, just not the swearing. (Sorry. I guess I’m just getting old!)

So, is the video worth shelling out $3 USD / £1.89 for? That’s a difficult one. Running at just over 40 minutes there’s no doubt that this would have taken a serious amount of time to put together. In fact, in the background notes to the full version, Dan explains that the project took about 3 weeks of editing, with the last 4 days being spent filtering out any bugs and adding in a few extra things. So, it’s clear that a serious amount of love has gone into producing this.

On the other hand you have to remember that the money won’t be going to fund any future Lemon Amiga produced videos. Dan seems to be about to give the Amiga scene a break, so the profits generated from this video will simply be divided between Dan, Matt and Filmnstuff.

If I knew the money was going back into helping produce further Lemon Amiga produced videos then I wouldn’t hesitate saying that it’s worth the money. As it’s not you need to think of how much enjoyment you’ve had from Dan’s, Matt’s and FilmnStuff’s videos over the years, as it’s only then can you decide whether it’s worth shelling out for. Perhaps you'd simply like to donate as a way of saying "Thank you".

It’ll be a real shame if Dan decides to call time on the Amiga scene, and a real loss to the community. Here’s hoping that his time away will be a short-lived one.

*** UPDATE *** Since submitting this blog post there has now been a change of plan. Dan, Matt and Filmnstuff have now decided to make the film FREE to view, and only ask that you make a donation (link is contained in the info section of the clip) if you wish to do so. The video can be found HERE!
Posted by Rob Hazelby at 12:17