Tales of Gorluth - an Action Adventure created with Backbone 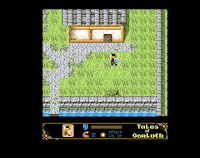 Way back on the 2nd of January I reported on the development of an as yet unnamed action RPG created entirely in Backbone. Since then Viddi, the author of the game, has spent hours and hours developing the title still further.

A few days ago he was kind enough to release footage detailing how far he'd progressed, as well as revealing what he has planned as development continues.

Since Viddi's initial update back at the start of January he's now reduced the size of the playfield to ensure the game retains a decent speed. He's also created a new status panel, which you can see at the bottom of the screen.

Other updates include the squashing of a number of programming/development bugs, the addition of new monsters, weapons and items, and 12 levels have been designed and implemented, with work on level 13 now underway.

Viddi also tells us that "The soundtrack is going to be enormous", and that there are 12 tracks so far. The music is one of 'the' things that really stands out about this release. Yes, the graphics look lovely, but it's the music that's absolutely gorgeous. I don't know if these are compositions he's put together or if they're tunes he's 'borrowed'. I'm thinking (and hoping!) that it's the former.

Check out the latest footage of the game in action below, and make sure the volume's turned up;


Further developments include the registration of www.talesofgorluth.de, the addition of an online manual, the completion of the game's logo, and the main menu structured and implemented.

Could this be one of the Amiga game highlights of 2013? It's certainly starting to look that way.

To follow the progress of Tales of Gorluth, visit this thread over on the English Amiga Board.
Posted by Rob Hazelby at 09:00