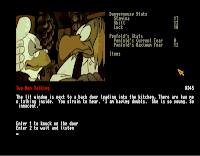 Despite initially making speedy progress developing his AMOS coded adventure, Christian of AmigaPD.com found that due to work commitments development had to come to a near standstill over the past couple of months.

Thankfully it looks like his work pressures have reduced somewhat, and development on the adventure is now continuing apace.

In his latest development update Christian revealed what aspects of the title he'd recently been working on.


"Work continues on the Dangermouse text adventure game. I have now finished adding the correct image to all 400 locations.

Last routine still to do - Save and load routine."

With a whopping 400 separate locations this looks to be an absolutely massive game, and certainly one you won't be ploughing through in one sitting. It could be time to dig out that graph paper and prepare yourself for an oldskool mapping session.

As soon as any further news surfaces regarding the Dangermouse adventure I'll post the details on this very blog. In the meantime you can follow the progress yourself by going to the AmigaPD web site at http://www.amigapd.com/ or the AmigaPD Facebook Group at https://www.facebook.com/amigapd?fref=ts
Posted by Rob Hazelby at 22:16