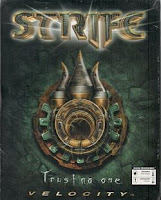 Released on the PC way back in 1996, Strife is a first person shooter that possibly pushes the Doom engine to its limits.

Featuring some basic RPG elements and the ability to talk to NPC's in the game, this FPS is a little different to the majority that came out at the time.

At this point you're probably asking "What does this have to do with the Amiga?". Well, in a recent post over on the English Amiga Board, forumite lantus360 revealed that he'd begun porting this over to AGA Amigas. Not only that, but he'd already made some stunning progress.

I managed to get an AGA Port of Strife ported over in a few evenings of coding.

If you don't know what this is its an old FPS based RPG that uses the Doom engine by Rogue. It's the last ever title that used the Doom engine and its a really awesome game"

Keen to demonstrate how well the game was already running after only a few days of development, he continued;

"Here's a quick look at how its performing - note its running on a Blizzard 1260 060 at 50mhz. Speed is looking pretty good, I could probably tweak it faster. I don't know if an 030 will handle this. I'd say a minimum 040/40mhz to be considered playable"


It would seem that further tweaks are planned for this exciting conversion, as lantus360 finished his initial post by saying;

"I am certainly interested in squeezing as much performance out as possible so I will take a look at the DoomAttack source. Having said that I cant see it running very well on an 030. Maybe at one of the smaller screen sizes it might be playable

Right now I'm timedemo'ing at 17fps on my 060/50mhz. I'm not sure where that lies in terms of comparisons to other similar Doom engine games. I'd be interested in any numbers people may have as a guideline"

To follow the development progress and discussion of this game point your web browser over to this link over on The English Amiga Board.