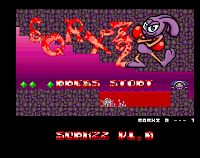 The waiting is over, and for us game-starved Amiga owners Christmas has come early!

Sqrxz 2, the sequel to the original hair-pulling, joystick hurling platformer is now available to download from the Sqrxz web site. In fact, the Sqrxz team have been so kind to us Amigans that they've gone to the trouble to release versions for several classic Amiga platforms/set-ups: CDTV CD32, Floppy Disk and HD Install.

Our Retroguru table with an Amiga 500 (provided by Mark!) allowed everyone to test the game live. Most people failed within the first three screens, but this was to be expected. Interestingly a very young girl managed to play past the half of the first level, which was hardly achieved by any other player.

Next possibility to catch a real floppy disk with the game is tUM 2012.

Feedback and donations are welcome anytime :)

Please kindly understand that it’s not possible for us to send out the game on floppy disk via snail mail. It just eats too much money and time."

To download the game, point your web browser over to:
http://www.sqrxz.de/sqrxz2-about/sqrxz2-download/
Posted by Rob Hazelby at 13:07