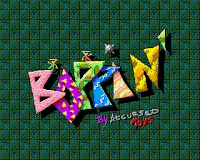 Back on the 18th, I took a look at Part 1 of Lemon Amiga's Games You've Never Even Heard of YouTube video, and urged you to take a look. Why? Well, there were some real rarities amongst the collection of titles they'd covered, and it was highly likely that the video would direct you towards a number of decent looking titles you'd never played back in the day.

In today's post I'm pleased to announce that part two is now up and ready for your viewing pleasure. In this latest video the Lemon Amiga team cover mouse-driven adventures and puzzle games.

Running at just over an hour in length there's a lot covered, and many games do possibly receive some rather too in-depth coverage. That said, it's already helped me to add three more titles to my "must track down" download list, and one I urge you to have a look at just because it looks so impressive. The titles in question are;

At 16mins 34secs - TeenAgent by Dynamix/Metropolis (1991)
A nice Lucasarts style point and click adventure. If you're after something to get stuck into and get the old brain matter going, this should be right up your street. According to a review on the Lemon Amiga web site, the game can be completed in around three hours. So, if you want something to while away a wet afternoon then this would be perfect.

At 29mins 05secs - Wet: The Sexy Empire, New Gen, (1998)
A very polished looking, German language only point and click. I've no idea what's actually going on in it, but this has some really high production values. It's really only worth a quick look for non German speakers/readers, and I'd recommend you take a look at the clips on YouTube rather than going to the trouble of installing it.

At 36mins 06secs - Boppin', Accursed Toys (1992)
There's not much I can say about this apart from that it's a nice looking puzzler, and one I'm looking forward to firing up on the Amiga when I get a spare half hour.

At 41mins 03secs - Bubble Heroes, Arcadia Developments (2000)
I remember reading about this back in the day, but until I saw this I'd never seen it in action. It looks really nice, and reminds me a lot of something you'd find on the Neo Geo. Sure, it's a Puzzle Bobble rip-off, but it looks like it's been done really well, and it's a game well worth adding to the collection.

Check out part two by going to http://www.youtube.com/watch?v=Su2KJ4weetY, or by clicking on the video below.

And with that, all that remains is for me to wish you a very merry Christmas!
Posted by Rob Hazelby at 14:24