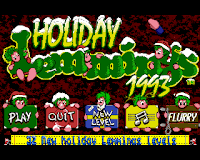 With the big day getting ever closer I thought I'd use today's post to have a look at some of the Christmas themed games and demos the Amiga has played host to over the years.

I've no doubt that I've missed a number of titles out, so please get in touch if you know of any. If I get a good enough response I may look into producing a follow-up article.

Don't be shy, drop me a message!

What better way to start today's article than the special coverdisk demo of ATR: All Terrain Racing, which was released on both Amiga Action #67 Disk 1 and Amiga Format #67 Disk 2

(I couldn't find YouTube footage of the Xmas version)

This was first released in 1991 as gift to fans who attended events, with an additional 4-level demo being released in 1992. Finally, this saw a full commercial release in 1993.

According to the Hall of Light entry, the box reads CHRISTMAS LEMMINGS, whereas the in-game screen reads HOLIDAY LEMMINGS 1993.

Going back to the mention the demo given away to fans, I remember picking my copy up from the Psygnosis stand at the first ever Future Entertainment Show, which was held at the soon to be demolished Earl's Court.

I also remember that if you were mad enough you could have your face and hair painted to make you look like a Lemming. Those who were dafter still you could slip on a velcro costume, jump on a trampoline and hurl themselves at a sticky wall. Madness!

If, by Christmas 1994 you'd still not had your fill of all things Lemmings, then you were probably one of those who bought (or copied!) Holiday Lemmings 94.

This version is really more of the same. Lots more levels, and it also includes all 32 levels from "Holiday Lemmings 93".

Released in time for the Christmas 1991 shopping season, Robocod was Vectordean's follow-up to extremely polished and often overlooked James Pond.

Swapping water for a full bionic suit, Pond could now leave his underwater home and explore the world outside without fear of gasping for air.

Given a very respectable 87% in the November 1991 issue of Amiga Power, with the reviewer declaring "One of the best games we've ever seen", it came as no surprise to see this subsequently being ported to almost ever computer and console platform known to man.

It's still a fun game today, but the lack of save option means it's pretty much impossible to complete unless you have a massive amount of time to put aside or can leave your Amiga on indefinitely.

If you do enjoy the Amiga version you may want to track down the Playstation conversion, as this features regular save points and CD music. Personally, I prefer the music on the Amiga version, but that's just me.


I'd recommend tracking down any of the above titles and playing them on your Amiga. They may be old, but they're still lots of fun, and with Christmas just around the corner, surely your trust Miggy deserves a bit of seasonal cheer, too.

My thanks go to the team behind the excellent Amiga Hall of Light for providing numerous nuggets of info featured in today's post, and to Lemon Amiga for the thumbnail image.
Posted by Rob Hazelby at 09:26