While "Spec-chums" have the long-running World of Spectrum to cater for all their Speccy based needs, and C64 owners look to Lemon64 for their fix, those with an Amiga haven't been quite as well catered for over the years.

This situation began to change 10 years today, when a number of Amiga fans came together to launch what is now known as The Hall of Light - one of, if not THE, largest Amiga game reference archives on the internet.

Here's CodyJarrett to explain how the project got off the ground in the first place;

"Surprising as it may seem, [today] sees the tenth anniversary of the Hall of Light's public launch. The website went live on Saturday 14th December 2002 although work had been happening behind the scenes and offline earlier that year and before.

The HOL evolved from an earlier idea for a game database which was called the EAB's Amiga Game Database (AGD). There was already a website called the Amiga Games Database but it seems that RCK just picked a descriptive working title.

I had been working on a separate offline list of Amiga games which was prompted by Amiga Power's "Absolute Power" guide (http://amr.abime.net/issue_24 and http://amr.abime.net/issue_27). Amiga Power's guide attempted to list every Amiga game ever and it later became a book called, you've guessed it, The Official Guide to Every Amiga Game Ever (although it did miss out quite a lot of games!)"

"My Amiga list aimed to provide screenshots for all the games listed in Amiga Power's book and I created lots of the so-called Double Barrel Screenshots (DBS) with a titlescreen on the left and an in-game screen on the right. It also featured some Amiga Power mini-reviews. The list turned into a set of HTML pages which was viewed locally or from a CD but was only ever a personal project.

It was called Those Were the Days and looked horrible. I also did screenshots for non-Amiga platforms. 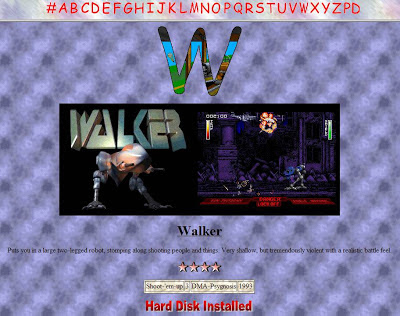 To read the complete story charting the early days of The Hall of Light, including a selection of images from a decade ago, point your web browser towards the following thread over on the English Amiga Board: http://eab.abime.net/showthread.php?p=855102#post855102

The above article provides a fascinating insight into just how far the project has come in just 10 years, and is well worth 5 minutes of your time.
Posted by Rob Hazelby at 09:47