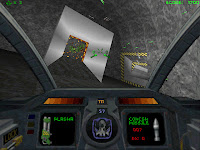 The DXX-Rebirth project is dedicated to two First-Person Shooters from the nineties: Descent & Descent 2

DXX-Rebirth is a Source Port of the Descent and Descent 2 Engines for Windows, Mac OS, Linux (most *NIX systems), offering OpenGL graphics and effects, advanced Multiplayer, many improvements and new features.

Now, thanks to the god-like coding efforts of NovaCoder, it looks like these games may be on their way to an AGA machine near you.

Here's the man himself with a few more details;

"I couldn't get very far with Hyperion's Descent port so I decided to just do my own.

So after 3 attempts to port this (and 2 months work!), here's the first video -> Descent DXX-Rebirth "

Before you get too excited, NovaCoder points out that at the moment he's currently busy working on NetSurf AGA, so he won't be able to give this port much time at present.

For further information on the DXX Rebirth Project, point your web browser over to http://www.dxx-rebirth.com/.

If you'd like to follow the progress of the Amiga version(s), I'd recommend following this thread over on the English Amiga Board.

I'll post further news on this as and when it surfaces.
Posted by Rob Hazelby at 12:18