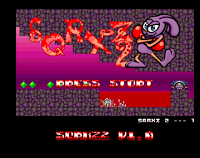 Due to be unveiled tomorrow, (8th Dec) at the 4th Retro Market in Vienna, is the Amiga 500 port of retro-styled platformer "Sqrxz 2 - Two Seconds Until Death".

Those who played part one will know just how unforgiving, but at the same time, playable the first title was. Part two will no doubt continue the hair-pulling tradition, so brace yourself for one steep learning curve/cliff!

The press release from http://retroboerse.de/ (which I've amended slightly so the English translation reads better) is as follows;

"The Retro Market Vienna presents to you, in cooperation with game developer Retro Guru, [the premiere of] a brand new classic Amiga game.

Sqrxz 2 - Two seconds until death [will be demonstrated live] on an Amiga 500 and [will made be available] in limited quantity [...] as free disk version to visitors. [...] Virtual disk images for all [will] follow immediately after the event".


(Sqrxz 2 Trailer - Note, this is not the Amiga version)

I'll be posting a review of the game just as soon as I get my hands on it. In the meantime, you can find more information about "Sqrxz 2 - Two Seconds Until Death" by pointing your web browser at: http://retroboerse.de/wien.htm (German language)
Posted by Rob Hazelby at 13:41