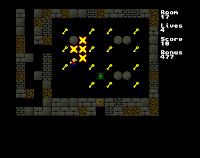 I've been charting the development progress of Amiganitzu on this very blog for many weeks now, and I'll admit to enjoying the various video updates EAB forumite CarasGhant has been posting to YouTube on a semi-regular basis.

Well, you'll be pleased to learn that the waiting is over and with Amiganitzu now reaching version 1.0, a full release has been made available for download - just in time for Christmas!

The release notes are as follows;

"An Amiga clone of Paganitzu (shareware version) for the Amiga, plus 10 original levels. Should run on all 68k Amigas, Kickstart 2.0+ recommended.

If you encounter problems try increasing the stack size, default is 50000. If you are running this on WinUAE don't set the CPU speed to 'fastest possible', set it to A500/A1200 exact".

Below is a short clip showing version 1.0 up and running;

Many thanks to AmigaPD for the heads-up on this release.
Posted by Rob Hazelby at 13:28